Well, finally got a release of the BTMappack out for Tribes 2. Quite a bit of work involved but its out the door in its first beta version.

As I have slowly become reacquainted with Tribes 2 the more I find myself amazed at how really....I mean REALLY bad it is in comparison to Legends.

First off the player physics are absolutely horrid. There was a period in Legends I think of as the "cinderblock physics" period. At that point in time the Legends Dev Team was experimenting with making the player physics slower and less responsive. It was really horrible and everytime I played the game during that period all I could think of in my mind was I was slightly in control, only slightly, of a "cinderblock" with an M80 strapped to it. Tribes 2 feels like that.....only worse. At this point in time, while the physics in Legends aren't perfect they feel so much more....sophisticated than Tribes 2 and make the settings in Tribes 2 feel like its a broken down junker chevy with bald tires next to Legends Ferrari.

The GL in Tribes 2 is about the most ridiculously overpowered weapon I have ever seen. The one in Legends used to be something like this one, fires too fast, too far, no bounce and excessive splash damage. They finally toned it down in Legends a release or two back. Now it makes the joke of one in Tribes 2 REALLY look bad.

In Legends this weapon is called an Ion Gun, it Tribes 2 its a chaingun. Both are pretty bad but the one in Tribes 2.....can you say "overpowered"? I knew you could....each and every time some moron blows you away from a zillion meters by simply spraying the thing in your general direction.

It never ceases to amaze me that this worthless piece of crap idea was allowed in either game. Talk about your lamer tactic as well as your lazy ass developers. First mines don't "fly". They aren't "skeet" that you can toss out and shoot for easy kills and double damage to the poor schmuck stuck dealing with the incredibly shitty physics in Tribes 2. Its become a cliche in Tribes 2. Enter a game, non stop MDing the entire time. Seriously needs to be eradicated....forever.

Both games make the Sniper Rifle (Rail Gun) dependent upon energy. In Legends the player on the move has at least a small chance of avoiding it because the physics are much better. In Tribes the player is nothing short of a sitting duck for stationary snipers. The player is moving so incredibly slow and with such lack of control they are easy cheesy targets for the no talent lamer standing off on a hill somewhere. Its poorly thought out in Legends but, in Tribes 2, its an absolute joke.

Perhaps Legends is just benefiting from a newer engine but after working with both games now on a fair number of maps I can say with all confidence that the lighting in Tribes 2 is abysmal. Legends looks a LOT better in this area. Lighting direction actually....wait for it.....WORKS! (gasp!)

I could go on. Maybe some other time. In short I am constantly amazed that Legends has been so overlooked for so long by the so called "Tribes community". Yes, it is missing some features....but not that many nor are they all that critical to actual quality of play. In fact, underneath it all Legends is a much better designed and more playable game than Tribes 2 has EVER been. Given the fact that much of the maps and other material could have been easily moved over from Tribes 2 to Legends I would have to say the "Tribes community" really screwed the pooch on this one.
Posted by Bear at 7:04 PM No comments:

After several months of.....uhhhh....struggle I am finally close to being able to release a version of the BTMappack for Tribes 2. It has not been an easy process to get maps that were originally built for Legends to run in Tribes 2. While the engines share a common heritage the differences between the two games made the task of moving maps from a newer version of the engine to an older one quite the PITA. Thankfully there more similarities between Legends and Tribes 2 than between Legends and Tribes 1 so even though it was a time consuming task...it was doable.

The first obvious issues were related to the differences in scale between the two games. Legends uses a player that is "larger" than the scale used for the player in Tribes 2. At this point the maps in this first version are tending towards the larger scale used in Legends. While this may be "incorrect" for Tribes 2 I am liking the effect of spaciousness it gives the maps when played in Tribes 2. I will see how I feel about this after a bit of real play testing. Perhaps they will get adjusted down later.

Additional issues involved checking the origins of various textures used in models and terrains to assure that they were free to use for projects like this and the absolutely horrid control over lighting in Tribes2 when compared to Legends.

I am near finishing this first release. The maps are basically done and all that remains is to go through each map a bit more carefully and clean up any missed items or mistakes. This first release IS what I consider a "beta" release. That means I do recognize there are other issues that will have to be cleaned up over a longer period of time. Since Tribes 2 (and TribesNext) does not support client downloading I thought I should get a beta version into players hands for more general testing. Future releases will change and replace this beta version but it will be a while before another release comes along.

While I do recognize these maps needs more tweaking to be called complete they are playable as is. This beta version is near ready and a release should happen in the next couple of weeks or so from the date of this post. I will announce the actual release on the TribesNext forums.

The initial beta release of this mappack includes the following maps:

I'm not much into being a "blogger". What I am into is creating maps for a game called "Legends". Legends is a game very similar in style to "Tribes"that is available for Linux and Windows.

The purpose of doing this is to have an area on the Internet that I can point those interested in following what I am doing with the BTMappack towards. I will post pictures and assorted info regarding my efforts and adventures as an aspiring mapper here. Visitors are welcome to comment but please stay on topic. Off topic comments and rude remarks will get deleted but polite and informative comments are always welcome.

Well thats it for now. Heres a pic from a map of mine called AzraelBT. This map is included in the current release of the BTMappack for Legends, version 1.05-3b1 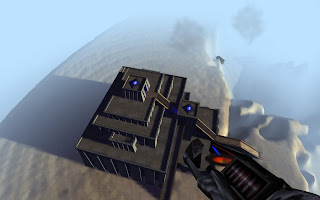